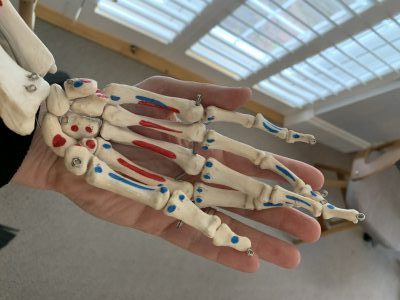 The wrist is one of the most delicate, complicated and vulnerable joints in the body. It’s classed as a complex joint, meaning multiple bones slide against each other to create a more complex movement – necessary in such a tight space and to be able to withstand the compressive forces wrists can handle! It’s capable of every movement possible from a joint in the body.

The 7 small bones of the wrist sit between the two forearm bones and the long bones of the hand. Their location is from our tree dwelling ancestors and allows the hand to close and open, as well as working with the elbow to rotate up to (and sometimes over!) 360 degrees. Those same tree dwelling ancestors are responsible for some of the muscles acting on the wrist. There are very few muscles that exist in the wrist, the only main one called pronator quadratus. The rest live in the forearm and pass tendons across the wrist into the fingers or hands.

These tendons are the most vulnerable part of the wrist to injury and pass in a series of sheaths around the outside of the wrist, linking the wrist to conditions like tennis and golfers’ elbow.

The most well known wrist injuries, along with the most common, are traumatic injuries from falls and impact – the typical ‘fall on out stretched hand’ or FOOSH. The small bones and corresponding joints make the area particularly susceptible to injury in this way.

However, other injuries can come in the form of repetitive strains to any of the joints or tendons and can also show in some of the nerves that pass through the wrist into the hand. The most common of these being carpal tunnel syndrome. Other tunnel syndromes are more rare but do exist, the next most common being a tunnel of gunyon syndrome, also known as a handlebar palsy.

That name is a giveaway as to the most common population to get this type of injury! However, it isn’t just cyclists – anyone with pressure on the ulnar side of the wrist (little finger side) with a gripped fist can be in the firing line, particularly with vibration, so power tools are a common cause.

Something to bear in mind with tunnel syndromes or any injury to the nerves in the hand or extremity is that it’s very important to rule out any other pathology or cause, as conditions such as type 2 diabetes are significant risk factors – they are also very commonly present in pregnancy!

The high usage of the wrist in nearly any movement using the hand leads to overuse or repetitive strain injuries being very common in the wrist – linked with overuse in sports, actions like using scissors in hairdressing or using keyboards excessively.

Some of the more interesting aspects of the wrist include a muscle left over from our tree dwelling evolutionary forebears, that isn’t present in everyone, called palmaris longus. This tenses the connective tissue of the hand and assists wrist flexion. One theory as to its development is that it assists climbing primates (and possibly climbing humans?!).  Did you know, the wrist bones in horses have fused to create their longer lower foreleg bones, meaning the joint that looks like their knee / elbow on the front leg is equivalent to our wrist!

Treatment of the wrist is often complex – reduction in load through rest and active treatments in the form of exercise or stretching are common. Many different methods of management can be performed by chiropractors including taping, acupuncture, manipulation and massage. These are effective in many types of wrist injury but, due to the complex nature of the joint and the structures passing through it, make sure to seek advice from a qualified professional (chiropractor, GP, physiotherapist or similar) before any sort of  intervention!